I fucking love getting these.  I swear it never gets old, and I always feel like a kid in a condom store.  Totally confused and weirded out.

I'm just kidding, of course.  A huge thanks to Tom for writing in but more importantly, way to kick ass and do shit right, Tom.  Congrats on the massive PR.

Hi Paul,
I just wanted to drop you a message saying thanks! Last year I bought and devoured strength-life-legacy, so when I saw you wrote LRB 365 I snapped it up instantly.

With the new year I was excited to run the LRB 365 program. Initially I had no idea what to program for my lifts as I had not approached a 1RM for anything except squatting in over a year. While I tried to program conservatively, hindsight being 20-20 I could have dropped the poundage a bit further.

Anyway, I'm elated to say that I blew away all my expectations in testing today! I programmed for 465 on the deadlift and ended up pulling 500! I've never really tested before, so I wasn't sure if I should attempt the other lifts in the same session or not. In the end I went with "go for it" and hit my programming goals of 410 squat and 270 bench easily, but I was too tired to attempt anything further. Once I started second-guessing myself as I started to tire, I think I killed it for me. Doesn't matter though; I'm super happy with my results.

As an aside, in my free time I'm a juggler and acrobat. With all the progress I've been making, my troupe had an old-school, leopard print, strongman costume made for me. It's pretty crazy to see what hard work and dedication -- what simply not missing a workout or lift for 3 months, will do. And, speaking as a former fat-kid, it's totally awesome to be able to move and lift anything and in anyway I choose. Never noticed how much I couldn't do until I found out what I was capable of. Being able to be a base for four other people to hang off of is fucking awesome. (www.detroitcircus.info if you're curious; I'm the fire breather) 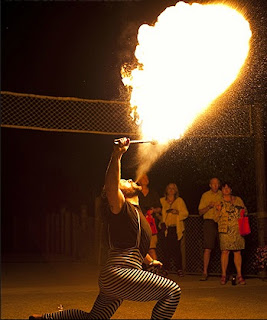 So basically, I just wanted to say thanks for all the knowledge and inspiration you've given. Looking forward to the conditioning cycle coming up for the spring! And, after today's results, I'm definitely going to check a meet this year.