10 ways to lose your man card

This is a common topic with me and my friends and I constantly give them shit about it.  So with that said, I'm going to list the top 10 ways you can and should have your man card revoked. 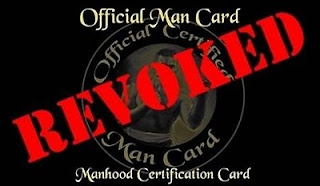 I don't give a shit what you like about it.  It's a soccer mom taxi and that shit is for women and men who get owned by their women (because no man ASKS to buy a minivan).  If you need to load up box after box of Tampax then sure, get you a minivan and call it a day.  Otherwise, you better be driving some shit that produces maximum horsepower with minimum gas mileage.  All you have to do is ask yourself this, would James Bond drive a minivan?  Fuck no.  He bangs trim and kills bad guys.  That's manly.  If Conan or Leonidas were created in 21st Century form would they be driving a fucking mom wagon?  What do you think?  If you bought one, turn in your man card.

This is probably a bigger pet peeve of mine than #1 but there really isn't much difference in 1 and 2 so  this one is #2.  Don't watch some shit you don't want to watch.  And how about this, spare me the "well she watches movies she doesn't want to watch with me, so I return the favor."  I'm sorry do you need to lose your man card for needing your woman to watch a movie with you, that she doesn't like?  If your movie watching shit consists of romantic comedies where some bitch is crying in the bathroom while her gay best friend consoling her or some shit like that, just turn the man card in on your way out of Bed Bath and Beyond, which you are sure to be in later.

3.  Having the dude at the auto parts store put your windshield wiper on for you.

Jesus mother of God, if this happened just drive your minivan into a light pole at the fastest speed it will get up to.  Which is about 47 MPH.  But leave the seatbelt off so you can fly through the windshield.  Have your man card in your hand so when you fly out the windshield someone will find it and know you got all bitched up about something, and were deserving of your death.

4.  Leaving a party or gathering with your buddies because your woman told you to

You don't leave MMA fight parties to go do some shit your woman told you to do.  You don't leave a kegger or the bar or club or anything where you are having fun, because she's pissed and wants you to do something to appease her.  What guys haven't figured out is, the MAJORITY of women are trying to tame men because it makes them feel empowered.  This is a psychological fact.  It's also a fact that when you get tamed they get bored with you.  Then someone else gets to hit it because you turned in your man card, and she made it happen.  Set yourself on fire with grease.

This means feaux hawks and that god damn emo style shit that Johnny from Karate Kid was wearing.  Johnny lost bitches.  And you lose when you get your hair "done" that way.  If you have to "do" your hair, then turn in your man card.  This doesn't apply to long hair unless you're spending time with a flat iron and "styling" it.  Think about this, everyone laughs at mullets now.  And in 10 years, everyone is going to laugh at all the dumbasses that sported these haircuts too.  Over time I am thankful for my Jason Statham hair because I never get caught in stylish bullshit.  Turn in  your man card to Daniel-san on your way out homeboy.

6.  Having a low back tattoo

What the fuck were you thinking?

7.  Going bitch shopping with her

This is where she drags you around all day to make you go shopping for shit she wants.  You spend half the day not buying a god damn thing and listening to her squeal about something on sale that she never gave a shit about before that very moment.  The only exception to this is if Victoria Secret shopping is involved, and then you need to limit the time there to try and get her into Frederick's of Hollywood because it's nastier.

8.  Stay with a chic that has turned down marriage proposing more than twice.

If you ask a chic for her hand in marriage once and she says no, that's fine.  She should at least be able to tell you why she is saying no.  And no should mean "no, not right now."  If you make some solid man-changes and she says no on the second try and you stay with her, just go get raped by a big sweaty bear in the mountains because you suck.  Turn in your man card after you get down from the Rocky's.

9.  Curling in the power rack.

Die you piece of shit.  You fucking disgust me.

A clear sign you need to turn in your man card is getting butthurt over this list.
Posted by Paul Carter at 7:59 AM