So I've been doing the Andy Bolton deadlift thing the last few weeks, however I really think I'm going back to training twice a week, with a lot of conditioning.  This is just where I feel comfortable when I am not getting ready for a meet or some kind of competition.  I still make strength gains and nothing feels better than being in shape.  Not even being strong(er).

With that said, all of my training is about to take a dramatic shift for a while.  I'll be pulling heavy every other week, higher rep squats, 1 legged movements, more overhead work, and just doing a lot of things I have not been doing for a while.  What will happen when I go to prepare for a meet or something else, is then run a shorter (4-6) cycle and scale things back.

Like it or lump it, Crossfit is here to stay, and I have a feeling those Crossfit games are going to blow up something big.  At least as big as Strongman stuff.  Powerlifting is never going to be that popular and I will tell you why.  Movement.  People like to watch movement.  In powerlifting it's all closed chain movement and the competitor barely moves (esp if he competes in certain feds, heh).  He squats, benches, and deadlifts.  In strongman the guy might be picking up barrels of midgets and running over hot coals with em for time.  I haven't watched the Crossfit games but they are damn popular.  And it's only going to get bigger.

And for better or worse, I think it's a good thing.  People complain about Crossfit all the time because "it isn't this" or "it isn't that" while we have an obesity problem in this country.  I mean really?  We should be encouraging people to do ANYTHING anymore.  Bickering about the fact that Crossfit isn't specific enough is kind of silly to me.  Strongmen have to prepare for a shit ton of events, but no one says their training isn't specific enough.  To me strongman training is probably the ultimate form of strength training for top shelf athletes.  So if someone isn't wanting to be an NFL linebacker or shit, Crossfit seems to serve a few purposes.  Get in shape and move.  Besides, Crossfit is loaded with lean women with great asses, and people are complaining?  I have no complaints.

I've been putting my coconut to work lately on everything that has transpired the last few months.  Working my diet to get lean, then eating clean big for several months to get bigger, changing my training towards hypertrophy, then running a short meet cycle to get ready for the meet.  If not for my popped quad I know without a doubt that I go at least 640-430-650.  I was good for a 450 bench as well but the ass cramp on 418 threw me for a loop.  So something in the 1710-1730 range, beltless.  Not otherworldly by any stretch of the imagination but I've said from day 1, I am not a naturally gifted lifter.  This isn't an apology this is a fact.  I wasn't deadlifting 500 from day 1 and benching 350 when I was 16 and shit.  I have worked incredibly hard to get to where I am at, a decent level of strength.

What I am getting with all of this is, I think you can work towards getting almost everything without compromising something else to a great degree.  Think of training as a pie chart with percentages.  When size is the goal, you allocate more resources (food, training reps) to that piece.  You can't move more resources to that percentage without taking away from other sources (conditioning and cardio), but you can be choosy about how much you allocate.  This is all rumbling around in my head right now so give me some time to work on it and I'll get it all out there.

The above link just has a study reporting what all responsible dog owners know.  "Banned" breeds are no more dangerous than any other dog.  It really all comes back to the owners.  And everytime I see some owner with a chain for a walking leash or some shit like that, I want to bury my knee deep into their fucking grill.  Dogs are essentially the greatest non-human companions we have on this planet.  They should not be used for fighting or to be your status symbol of how "gangsta" or how "tough" you are.  A dog makes you neither, it just makes you a fucking piece of shit for creating an unstable dog.

The Fighter - Watched this last night.  It still falls under my "generic sports movie theme" for the most part.  However Christian Bale and Marky Mark were both fantastic in their roles.  And on a personal note this movie hit home with me on some levels because I've dealt with family members who suffered from addiction. 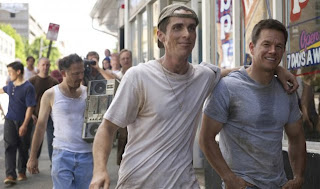 I don't care what anyone says, that Fedor fight was an early stoppage.  Yes he went limp for a second.  Literally, for a second.  1 mississippi...2 mississi-Fedor is turning over to defend himself.  But nope, Herb Dean, assclown extraordinare, calls it a stoppage.  I like Hendo so it's not like I had a dog in this fight but Fedor has been rocked like that 100 times, recovered quickly, and won.  This could have easily been one of those epic fights instead we get an early stoppage.  At least give a guy 2 seconds to turn over and defend himself.  With all that said, you gotta wonder where Fedor goes from here.  I said this a long time ago about BJ Penn, eventually you slow down enough so that the people around you catch up or pass you.  BJ Penn got by for a long time on God given skill without putting in a lot of work.  By the time he figured out he needed to put in the work, it was too late.  Now no one "fears" stepping in with Penn, and this will obviously take some of the aura out of what Fedor was.  I think if Fedor cut down to 205 he could probably dominate for a while again, but the fact is, he needs to change camps and reinvent himself a bit.  I don't know if that will ever happen.

What I do hate to see is all of the schmucks and idiots come out of the woodwork to dog on Fedor.  The guy ran off a string in MMA that will never be matched.  And while there are some tomato cans thrown in there (what guy doesn't get fed some of those in his career?) he fought wars against a lot of name guys in their prime.  He's still going to go down as the greatest MMA fighter of all time, like it or lump it.

That covers most of my weekend bases.  Hope everyone had a GOOT ONE.  Monday's still suck.
Posted by Paul Carter at 6:39 AM