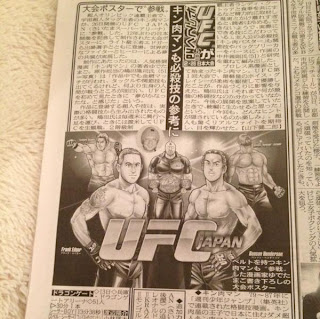 That, ladies and gentlemen, was a title fight.

Edgar Vs Henderson - (Fight of the Night) Correct but controversial.
Rampage Vs Bader - Wrong but Rampage got a slam and some cheers.
Kongo Vs Hunt - Wrong. The man of few words was too much for Kongo.
Akiyama Vs Shields - Correct but controversial.
Okami Vs Boetsch - Wrong. I still think Okami is the better fighter.
Pettis Vs Lauzon - (KO of the Night) Correct. Unpredictability wins with a kick.
Gomi Vs Mitsuoka - Wrong. Gomi got him in the second with strikes.

Besides a new champion, I got a refreshed perspective on a couple of fighters and some random thoughts: I under estimated Hunts power. Shields looked like shit compared to Akiyama. Ryan Bader has weird looking abs. Edgar should get an immediate rematch. We need some more ring girls. Prides entrances were better.

As far as Edgar is concerned, he deserves and immediate rematch. The UFC should recognize this and treat him fairly. It seems there is some pressure on Edgar to move down to 145lbs and take a fight against Jose Aldo. Some comments made by Dana at the post event press conference indicated that Pettis might get the shot, and I think that would be a smack in the face to Edgar. If not for the fact that Edgar has spent the last 2 years fighting guys he has already beaten, then for the fact that he threw the new champ around at will.

This was a great card, but it didn't resurrect Japanese MMA. Not that I expected it to. The UFC has indicated that it will come back again soon. I think there is still some serious repair needed for Japanese fans. Not necessarily by MMA in general, but by MMA's major occupier and owner of all things formerly PRIDE dominated.
Posted by Zach at 8:39 AM