MMA Blurb - UFC 144
This Should Be a Tribute to PRIDE 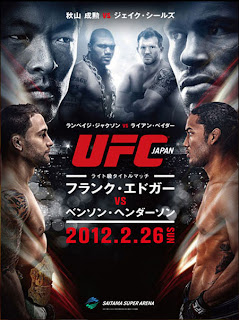 UFC comes to Japan! Here are the cards prime fights. Who I am rooting for in bold.

I choose Okami on experience alone. Whoever loses this fight, unless it's fight of the night, will get cut.

Shields will win this. He has fought and beaten a better caliber of fighter than Akiyama. I feel like this fight is to keep him busy, and give him a win.

I choose Kongo by striking. I think Hunt will be comfortable in Japan, as he has fought the majority of his career there. With losses to the top heavyweights in the world, his MMA record of 7-7 is less than desirable. That is, unless you consider who he lost to (Gegard Mousasi, Alistair Overeem, Fedor Emelianenko, and Josh Barnett among some). I think he is the underdog in this match, and is being under estimated. With a weight advantage, Kongo isn't going to be able to man handle Hunt, but doesn't need to if he brings his striking. Kongo has had more fights, and is slightly taller, with an 8" reach advantage. Both fighters are former kick-boxers, so we'll see if that moves this fight to the ground at all.

While I like Ryan Bader, Rampage is a badass, and I think the crowd in Japan is going to go nuts for this fight, but mainly for Rampage. Bader has the wrestling background to take Rampage down, but Rampage is growing tired of fighters who just want to take him down. We'll see if he lets that frustrate him as much as he lets his Japanese fans motivate him to pick Bader up and slam him.

This is a hard call. Edgar has the tools to beat Henderson, but I think Henderson wants it more. Henderson has consistently proven that he can not be counted out. He has a slight height advantage, and while I don't think his punching power is near Edgars, I think his versatility on the ground and on his feet, is equal or better than Edgars, minus wrestling. Edgar must be frustrated, having fought the same two guys over and over throughout the last 2 years of his career. While Henderson is a fresh opponent, I feel he deserves this shot, is ready for it, and has a great chance of defeating Edgar. Gut calls this for Henderson.


All in all, I like this card. It has a lot to offer. I think its a shame that Zuffa didn't promote this as a tribute to PRIDE. I also think its a smack in the face to Japanese fans to have this at 10AM their time, in order to cater to American fans. MMA has suffered in Japan since PRIDE, and UFC bringing a nicely rounded card there should have been done in such a way that the Japanese fans felt flattered. UFC needs to realize that the real fans of Mixed Martial Arts, are just that; Fans of Mixed Martial Arts, not the UFC.
Posted by Zach at 8:48 AM