The Lifer Series - Part 1 - I Will Squat

Squatting, more than any other lift, has been drilled as the go-to lift, for strength, power, and mass.  It has been called the king of lower body exercises, had entire routines and philosophies based around it, has purportedly cured cancer, aids, the beetus, and the desire to be a pussy.

Squatting is your man making exercise.

When my squat is in the shitter, without fail, the rest of my training usually is too.

If my squat is kicking ass, the rest of my training is too.  Even if it's not, it feels like it is.  You know why?  Because my squat is. 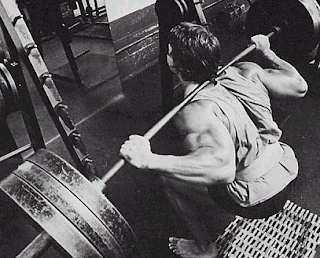 Squatting high reps sucks because it makes your lungs burn like inhaling battery acid, and makes your lower back ache from supporting the weight for such an extended period.  It makes your legs feel like those of a man who just woke from a 6 month coma, and turns your stomach inside out.

Good.  That's what it's supposed to do.

I paid the piper may times over doing years of high rep squats.  Eventually it's something most guys will need to do in order to understand what kind of intensity it takes to move up another level.

Lots of guys avoid this, because it's an excruciating endeavour.  If someone doesn't avoid it, it is usually an undertaking most trainees approach with trepidation and anxiety.  At least, any of those that have done enough of these kinds of sets.

A high rep set of squats can really test your willpower and desire.

"How bad do you really want this?" it asks you, with an insidious grin.

Will you rack the bar when it gets really hard?  When the reps still look easy to the casual onlooker, but your lungs feel like someone is smelting steel inside of them, and your upperback is numb from carrying the load?

These kinds of sets tell you about who you are in that moment in time.

Sometimes you quit.  It does happen.  To all of us.

Sometimes you push through it, and continue on.

However, each time is a battle you don't soon forget.

Lifters with enough time under the bar have plenty of these guys of war stories.  When they did stupid shit like "20 rep squats for a few hours, and couldn't walk for the next 5 days".

It's a rite of passage lifters eventually need to take.  A road that should be traveled at some point.

After enough time on this journey, eventually the mind and body succumbs to the bar and you say "fuck this, I'm going back to lower reps for a while."

For a while, it's awesome.  Then the weights start piling on, and oh how daunting all those plates can look stacked on each end of the bar.

Then you realize, you only traded out one kind of anxiety for another.  The fear of the pain and anguish, has now been replaced by the fear of weight on the bar, and the very real possibility, that you might not be able to stand back up with it, once you sink down into that black hole.

Guys with enough time under the bar know that feeling of uneasiness that comes with the unracking of a weight they have never squatted before  A weight that feels so heavy, that just supporting it on your back makes you question everything about your decision to try and squat this.

Sometimes you make it, and all the pain feels worth it.

Sometimes you don't, and for a moment, you feel emptied out.

Squatting tests your mettle more than any other lift there is.

Miss a deadlift?  Drop it.

Miss a bench?  Have the spotter pull it off (unless you don't have one, then you do that rolling the bar down your body movement).

But missing a squat feels completely different.  Getting under the bar feels like an investment.  Losing out on an investment hurts far more than just dropping a few coins into the slot machine.

It's all of these reasons that squatting at the top of the lifer list.  If you can't squat because of physiological reasons, then it usually takes the make up of many other movements to fill that single void.

If you can squat, you should be squatting.  You should explore every kind of squatting that you can in order to understand and appreciate all of the things the squat does to you, and can do for you.

If you can squat, and aren't, then you need to man the fuck up and spend some time under the bar learning the lessons of victory and defeat.  You might also want to stop calling yourself a lifter, because picking your favorite pet exercises (generally bench, curl, and some shoulder press) each week while avoiding squats, just makes you a lifting bitch and a coward.

The squat is not your enemy, or your adversary, but your teacher.  Look to each squatting session as a learning experience.  Getting better at squatting generally means you're going to get better at everything.  This is the reason that "I will squat" is at the top of the Lifer list.  From a training perspective, it is probably the single most important thing you can do.

No one ever got better at squatting and then failed elsewhere.  Because even if they did, they didn't.  You know why?  Because the squat got better.

And this is why Lifers squat.