About a month left until I fly into Columbus, Ohio.  Been looking forward to this trip for some time and I expect many good stories to come of it.

We will be doing Chaos and Bang Your Earballs TOMORROW NIGHT!  Jamie has his stuff squared away since the meet and we're ready to rock n roll.  I already have the questions all lined up and ready to go.

My leg, amazingly, had no pain after Saturday's squat session.  Yes, it was only enough weight for a adolescent midget female to struggle with, however just being pain free the day after squatting was nice.  Hopefully that continues for a while.

Apparently, I need to get my wisdom teeth taken out now.  I still have all 4 and they came through straight for the most part, but they are starting to now ache a bit and every once in a while they cut into my gums.  So they gotta come out.  I'm sooooo looking forward to this.  That's heavy sarcasm by the way.  I've heard so many horror stories about getting wisdom teeth pulled, and having my mouth filled with gauze for a few days doesn't sound too enticing.  Anyone that has a story to share about it, go right ahead.

For any of you in Australia, Phil and I already have hits for two seminars there.  If you are in Melbourne and are interested please let George Mariolis know.  If you are in or near Sydney contact Amir Fazeli to let him know you are interested.  If it's in two places we would prefer to just make a longer stay on the one trip, and schedule it all together.  I promise Phil and I will bring our A game with us.  Phil will be going over all the Olympic lifting stuff and I will be doing all of the power and assistance work stuff.

Speaking of Phil, books are being printed as we speak and as soon as they arrive on my doorstep, I will have a post about it.  I will also start getting them shipped that day.  So just be patient with me guys.  The new Lion shirts are also ordered.  Those things are going to be fucking bad ass!

I'm still hitting up guys like Rollins and others for a podcast sit in.  Trust me guys, it will happen.  I'm like a fucking pit bull on a turkey leg.  I won't let it go.

I had a poll on my Facebook to see what band is actually worse than Nickelback, and it turns out there is one!  It's Insane Clown Posse.  I thought that was a pretty solid pick by everyone.

And speaking of solid pics, this was in my mail this morning....... 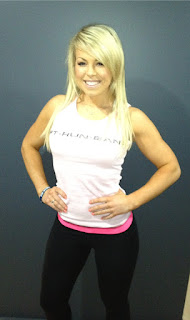 That is my very good friend Rachel Guy and she's also helping with getting things going on the Australian seminar.  She also is not hard on the eyeballs.

I have yet to see the new Batman movie, but it's 3 hours long and that's kind of a movie commitment.  As soon as I get the chance I'm going to get out to go see it.  No gunman jokes needed.

I hope your Monday sucked, as mine DID NOT.  So there.  What now?
Posted by Paul Carter at 5:02 AM