Another trip to the Strength Guild and backyard meet write up

So I made another trip out to the beautiful land of Topeka.  Land of milk and honey and big succulent tittays.

Ok so I am exaggerating, Topeka kind of sucks.

Except for The Strength Guild and my buddy Phil Stevens, and those things are awesome.

Let's just say this about the weather.  It was mother fucking HOT.  102-104,000 most of the day, and Phil did his little back yard meet in The Strength Guild, which if you did not know, is his two car garage turned gym.  Phil also likes to keep the doors open you know, so the eleventy billion degree air can flow freely through the place. 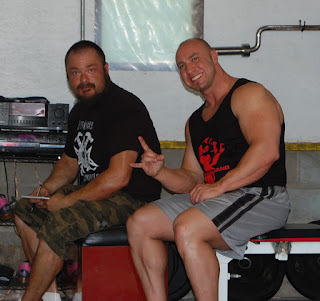 Anyway, all complaints aside, I had an awesome time and really loved watching his group get after it.  There were no world records at threat in this meet, however you wouldn't have known that if you were just judging by the enthusiasm. 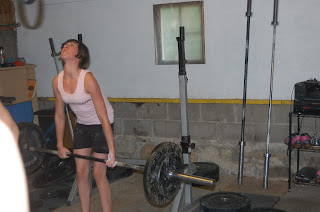 Even more spectacular was Phil's little girl who dunked a 45 pounds squat........at 5 years old.  And it was textbook.  She also hit a couple of nice benches, but I don't recall the weight.  She also can do chin ups.  Talk about a little powerhouse!

The meet was long, and exhausting and my hat is off to all of the men and women who showed up and competed hard in a very tough environment.  It was my honor and privilege to be a part of it, and I plan on spending part of my meet prep there with Phil, later on in the year.

After the meet was done, Phil broke out the burgers and hot dogs (2.5 of which he let fall on the ground) and taunted me with bacon bread and funeral potatoes (you read that right).  However, I stayed true to my diet and choked down a couple of chicken breasts, a jar of baby food sweet 'taters, and some home grown zucchini.

The trip home was incredibly quiet, and I think by the time I arrived back at head quarters I was the only one awake.

Many many thanks to Phil and his wife for having us out, and we look forward to many more. 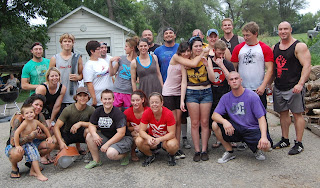