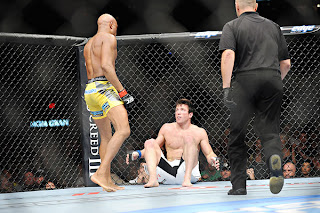 I apologize for my tardiness. It took me a while to dine on and digest my words. I was stunned by Chris Weidman, dumbfounded by the new TUF announcement, and blinded by spinning jackassadry.

Chael definitely reminded everyone about his potential to dominate opponents. Silva included. It's too bad he couldn't maintain that level of dominance instead of switching to spinning back fist attempts. As Nick Diaz put it "So we're throwing spinning shit now?!?!" A few people implied that the back fist was improvised, but I remember watching video of Chael at open workout practicing it over and over. Silvas defense for Chaels spinning shit was probably the most impressive move of the fight, both in simplicity and effectiveness. A dazed Chael spun for it, Silva stepped under, and simply tripped him. As Sonnen looked up at Silva, with his back against the cage, the look on his face was as classical as it was honest, and the rest is history.

For Chaels disadvantages in this fight, I can't really think of any other than his T/epT ratios were within much more acceptable ranges. I brought this up with Paul before the match, and he insisted it wouldn't matter. I am not saying it helped one way or the other, but thought it was worth a mention. Going one round in dominant beast mode, vs his previous 4.75 rounds is telling of something. Cutting as much as Sonnen does, even with Dolce, is still a disadvantage. Silva is just so quick. I feel like his synapses are smaller. That trip along with the knee were so quickly improvised.

I was upset for about 30 seconds until Silva handled his business afterwards like a gentleman. For that, he is forgiven for any previous acts of debauchery. He handled it like a real champion. Chael has handled his loss really well too, which has to be a lot more difficult than winning.

The main event doesn't excuse the remainder of the card. Forest needs to get a grip and quit running out of the damn ring. I knew that match was going to decision before Forest distracted me with that badass tshirt. (Pauls still kill his though.) If that card was a meal at a restaurant, I would have asked for the manager or possibly dined and dashed. Depends if I had a coupon or not. Instead of watching the card in its entirety, I found my ADD ADHD OCD kicking in, in 1080p HD, and supplementing it with a few racks of pool.

Moving on to UFC 149, which is like UFC 148's cloned bastard red headed step child minus the WWF'esque salesman. I expected Barrao to finish Urijah. While some may find that disappointing, I attribute it to Urijahs toughness. Broken ribs hurt man and he's proven he's tough in more fights than one. I wish Urijah the best, but I don't know what's next for him. If he expects to make any leaps or bounds in this stage of his career, he is going to need to get out of the comfort zone in his training camps and completely switch it up.

The next season of TUF was announced as Roy Nelson vs Shane Carwin. This idea makes me blink uncontrollably, my hair line starts itching and I have to scratch it in wonder. Fat guy vs giant tank. Reminds me of this one time I wanted to fight Paul for taking the last cookie. Why don't we just run Carwins numbers through the old "How many 5 year olds can you beat up?" simulator, and then give him a title shot? The way title shots have been arbitrarily decided lately would justify this. I love Roy, and actually enjoy rooting for him as a gate keeper. He's a great role model for fat guys all over. I realize that Frank Mir isn't going to be around now, and other gate keepers are needed, but that doesn't excuse the matchmakers from making matches that actually make sense. Carwin may exhibit signs of ring rust, but following that logic doesnt turn up very many other like examples for guys at Carwins level. Carwin vs Cain would have been perfect. I don't get the Roy choice.

Chris Weidman. Did you guys see him? Impressive. That shit was free.  Rumor has it that Munoz had some serious cutting to do. The Vera vs Shogun card was free too.
UFC 150 is coming up, but Im not so sure I'll be getting it. The last two were supposed to be blockbusters, and I am beginning to think the fights should be dynamically priced based on fight metrics plus KO/TKO figures. I would have got more excitement getting robbed for 120$ than the last two cards combined. I can't say the same about their free or under cards. Strange imbalance there.

Then again, the cards could be worse.

If BJ wants to come stay, you let him.

Fighters then and now thread on Sherdog.

Judging Criteria Changing This is kind of a big deal.

Statistics from all 200 fights so far this year.