The Lifer Series - Part 6 - I will focus on the big picture, not quick fixes or fads

"Arnold doesn't come in a bottle."

Back many moons ago, when I used to buy muscle rags and read them furiously cover to cover, I remember this article from one of the writers that was covering a bodybuilding show.  It wasn't the show that I remember about the article.  In that article, he wrote about how he saw a young man in the audience that was wearing a shirt a particular motto on the back on it.

He had no idea what that meant, and neither did I.  For some reason however, it stuck with me.  ""What the fuck did that mean? " I thought.

It wasn't until years later that I had an epiphany about it.

I was hanging out with my training partner in the supplement store he worked in, listening to him tell me about all the stupid ass customers he had to deal with on a daily basis.

"I have these people that come in, and they ask me "what can you give me that will make me want to go to the gym?""

I laughed and asked what his retort to such nonsense usually was.

"I tell them, "sorry we don't have motivation in a bottle yet.  I think they're working on it.""

For some reason, my brain did one of those over-my-head only-scientifically explainable chain relations, where it attaches that moment to another moment in time, and his words set off my memory of the motto from the back of that guys shirt.

It seemed totally obvious to me at that moment, what it meant.

Arnold is the icon, the pinnacle for most guys when they talk about physical development.  You can't go pick up a bottle of "Arnold" at the store, and turn into him however.  You're not going to get tub of protein powder, or bottle of superdrol, or even a bottle of test and deca, and become Arnold overnight.

Hell, Arnold didn't even become Arnold overnight.  Most guys that have been around the squat rack a few years have seen Pumping Iron.  Arnold trained his balls off, and was incredibly meticulous in his diet and entire preparation.  Let's not act like Arnold was some lackadaisical dickwad who fucked about on machines or did a few heavy singles like most lazy fat guys do. 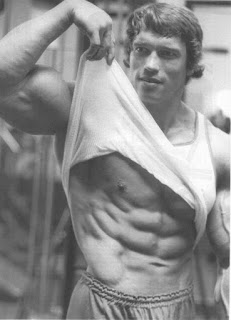 Arnold, like most successful people, had a big picture view of his life.  I remember reading that one of his goals was "to have his first million by 30".  Which he did.  A million in the 1970's was a lot different than a million now, too.  He did it through real estate, and a lot of that work was done with his own bare hands (and slave labor through Franco too).  He didn't mind putting in the work and letting things develop over time because he had a plan, and he would see it through.  When he did see it through, all the things he had been working for, came to fruition.  Imagine how sweet the nectar of that success was.......amazing.

The reason your training sucks, or your progress sucks, or you suck is because want to go to the store and get Arnold in a bottle.

You want that quick fix.  To wake up tomorrow, and all your weight training or financial or relationship dreams to come true.

Wouldn't that be nice?  Sure it would.  How much would you really appreciate it?  Probably a lot actually.  As much as if you earned it?  Obviously not.

How many lessons would you have learned through it?  Fucking zero.

When I wrote the darksidin articles, I couldn't believe how many guys overlooked that MASSIVE point I was trying to make about maxing out natural potential.  It's the struggles that teach you the most about how to fix things, and make you better.  You just have to persevere through them.  How much do you learn about something, when it's never broken?  If you never learn how to fix a problem, how much does your knowledge base grow?

If it came easy to you, what can you really tell me to get better, since you don't know what it's like to struggle with that thing?

Mind you, I don't dismiss that that someone could have something to offer.  However if you want to really find a gold mine of information, find a guy that slaved away for years at something he sucked at, and made it respectable.  Then you'll really learn a lot.  Most guys however, go right to the guy with the best lift or greatest physique and get their information from them.  Then they try to implement these methods, only to be disappointed when they aren't a champion 13 days later.

The issue with lifters in general, is that most of them don't want to enjoy the journey or learning process.  They say they do, then they violate the rule about "not giving a shit what others can do".  Then they start routine hopping or taking more drugs, or doing whatever, in order to catch up with someone else or do what they can do, or look like they look.  Lifting and bodybuilding is such a "me" recreational activity that most of the people involved in doing it, are "now" people.  I want it NOW NOW NOW NOW NOW.

If you don't put down the yard stick long enough to stop measuring yourself against others, you'll never stop trying to look for short cuts.  Your whole life you get warned about short cutting shit, but there you are, taking every new supplement that comes out and trying every new training routine that hits the internets or magazine rack because you think it's going to do something miraculous.

The last code of "not giving a shit about others..." ties so closely in with this one.

When you stop giving a shit about what other people are doing, you will stop looking for quick fixes and stop turning to fads in order to get better.  Remember, getting better should be cultivated at the very fabric of who you are, and what you are about.  Getting better is generally the antithesis of quick fixes.  It's 5 pounds here, 10 pounds there.

If you are deadlifting 450, why are you programming your next strong-15 cycle for 515?  You REALLY think that's going to happen?  It's not.  My programs and philosophies are for guys that know and understand the big picture.  That this cycle builds on the next one, and that one builds on the next one....that my life doesn't depend on me making my ultimate goal in one cycle.  It comes with an understanding that there is a process involved in getting jacked and strong as fuck.  The term "next level" doesn't come from a bottle of test or a super secret Russian squat program.  It comes from 10,000 hours of work that eventually forges you into something you never thought possible.

When I wrote about becoming the lion in Strength Life Legacy, I wrote about the nomadic lion and his journey.  Without that journey, he could never be strong enough to have his own pride.  He had to learn how to hunt, fight, kill, survive, and all the lessons he would need to know if he were to be victorious in earning his own pride someday.  He didn't just wake up one day, and have his pride handed to him because he was the son of the king.  This is a lie, I don't care how many times you saw The Lion King.

Fuck no, he was exiled.  His keep had to be earned.  If he survived, it meant he had what it took to be king; to reign.  Lessons were learned, and he grew strong in body and mind from it.  Without going through that fire, he wouldn't have what it takes to protect his pride and be dominant.  It was a requirement.  Remember what I wrote in the last article about fire?

You can't blaze a trail without knowing the importance of fire.......

Without your journey, you will not become the best of anything you could ever be.  Stop looking for quick fixes and special routines.  Get back to understanding progression over time, quality eating, rest, recovery, intensity, blood, snot, and vomit.

Get better, not bitter, from battles lost.
Stay humble with battles won.

The tears shed in victory and defeat are part of the ingredients to making the elixir that you seek.  How many tears do you think it takes to fill up a bottle titled "The Lessons of My Life"?

The nomadic lion loses many many times to bigger and stronger males because he's not seasoned enough or strong enough to overcome them.  He doesn't quit, he doesn't give up.  He doesn't go to the fucking African Lion GNC and sift through the pages of a magazine to find the latest supplement that will make him king of the jungle.  He puts his head back down, sinks his teeth into something else, and bloodies himself.  He knows what he has to do, and that there are no short cuts to do it.

Head down, eyes in front, back to work.  Arnold doesn't come in a bottle.